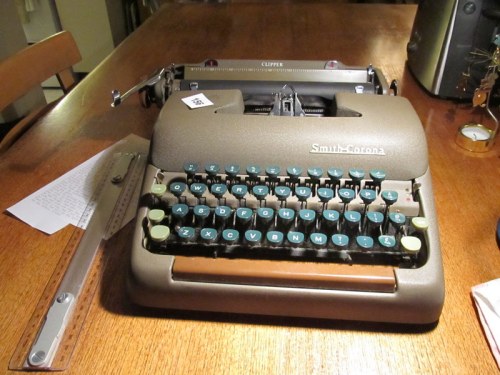 Last week I saw this Clipper was to be auctioned at Salvation Army. The auction closed at 6 pm. I left at 5.20 in pouring rain, thinking I was mad to go out in this weather. When I arrived, the parking lot was full and there was a crowd waiting for the end of the auction. It was a silent auction, so they claimed, but in reality it wasn’t. If anyone there was interested in anything at all, they held a live auction after closing of the silent auction. I checked the Clipper – still the same price after a week. One bid. I hung out and found something I needed, a ruler for an old drafting machine I picked up last week, to use for laying out large paintings. A bargain at $2.

More waiting around, then I checked the price of the typewriter – same as before. OK, I was now convinced nobody was interested in the typewriter but me. I got a bid form and filled in my bid for $2 more. So generous. The silent auction closed at 6 pm and 10 minutes later they threw open the auction to induce more bidding, of course. The real bidding was about to begin. The first thing up was some gold jewelry. There were half a dozen people keen to have that. The silent auction “winning bid” was $40, but it went for $200. After that there was more of the same. Jewelry, more jewelry and then something called Donald and Mickey. I presume that was Duck and Mouse, but certain humorous images popped into my head just the same.

A guy who told me he’d driven in from way out of town in the darkness and driving rain bought that. After a half hour passed I decided to inquire about the typewriter. Big mistake! Now it would go live and open for bids by anyone present. I should have left my bid and gone home. But, as luck would have it, I was the sole interested party. I paid and went to get my prize. A fellow saw me putting the typewriter in its case.

“If I’d known it had a case, I would have bid on that”, he said, then added, “Tom Hanks uses a typewriter”.