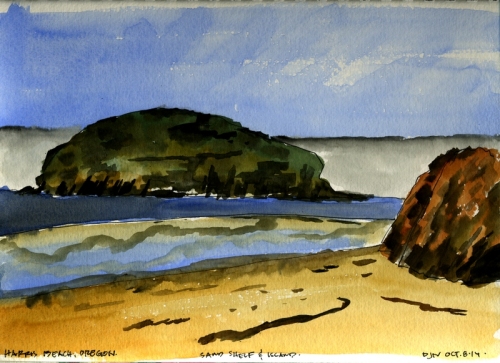 Summer behind us here, with two weeks vacation to spend we set off on Highway 101, down the Pacific Coast, bound for California. Like all trips, this one was a perfect opportunity to do some sketching and scour the thrift and antique shops for cool stuff (typewriters and old cameras). 101 is a marvelous road, full of stupefying vistas, interesting towns and endless campgrounds.

After 2 weeks of browsing, it was on the last day of the trip that I discovered two typewriters that I could afford. The poem was typed on the one in the picture. The typewriter came with the previous owner’s name on it. A Google search revealed that she died over 10 years ago, but her husband only died last year. So I surmise that the typewriter was disposed of by estate sale, hence ending up in an antique mall.

My first trip down 101 was about 25 years ago, and I thought it wasn’t very interesting. At the time I was fresh from the east coast and had been hoping to see a lot of quaint east coast villages. Now, many trips along the route behind me, I see it differently – an amazingly interesting and varied route. I can hardly imagine that there is another single highway of its length that offers so many beautiful landscapes and scenes as this one does. However, I have heard tell that US Highway 20, which happens to start at the intersection with 101 in Newport, Oregon, is a likely competitor. One day… 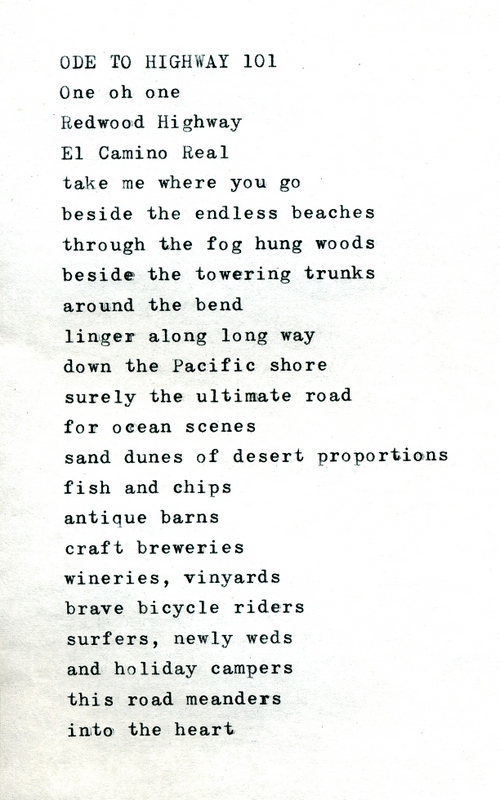 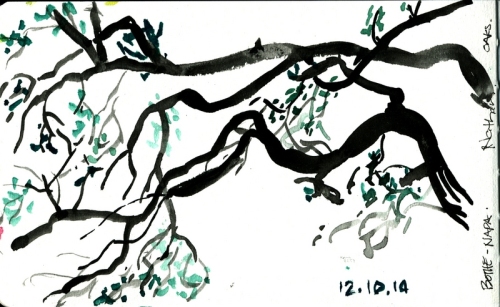 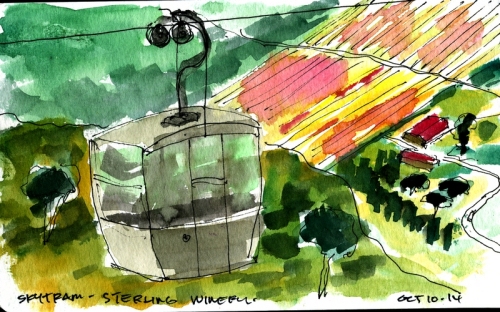 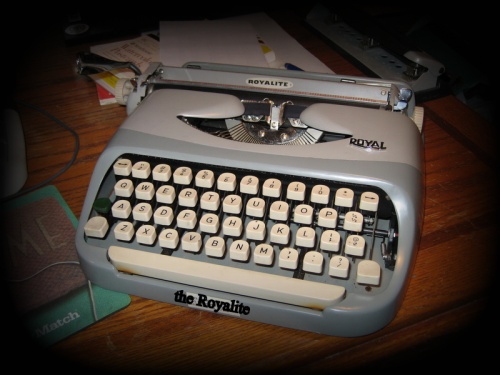 The Huns are Back

We could use a laugh around here today… this is a storyline I’ve been using for my kids bedtime stories going on 30 years. This one is new, I wrote it for our annual camping trip. This is the first time I’ve illustrated a story. 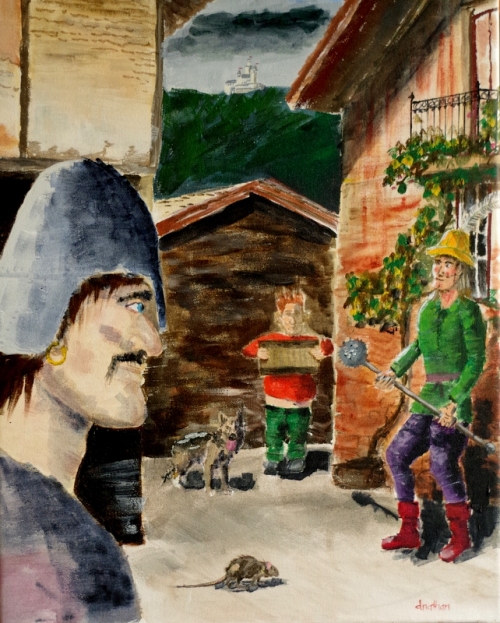 PRINCE RHINESTONE AND THE HUN

By Donald J. Nathan
©2014
When Prince Rhinestone returned home after some years of fighting Huns, he had grown several inches, and needed new armour.
He paid a visit to his armourer, Sir Breakwind, to be fitted for a new suit, along with a matching sword. When he walked into the workshop, however, he was surprised to find that Sir Breakwind had gone out of business, and found himself smack in the middle of an auction sale.
“I say,” said Prince Rhinestone to no one in particular, “I say, what is going on? Where is Sir Breakwind and why isn’t he here? I want a new suit, and a matching sword!”
There were chuckles from the crowd and Prince Rhinestone looked around vexedly.
“Sold for thirty seven shillings to the man in the green pants,” said the auctioneer, slamming his gavel with a bang.
A short man came waddling up from the back of the room to the clerk and pulled out some coins from his purse. He dropped them on the desk, picked up a box of chain mail and turned to leave. Prince Rhinestone followed him out the door and hurried to catch up.
“Excuse me my good sir,” he said, tapping the man on the shoulder, “would you be so kind as to tell me what exactly is going on here?”
The man looked up at the Prince.
“Sir Breakwind, he’s gone out of business, your Highness. It’s a shame I say, but what can be done I asks you, Sir? It’s that new cheap imported armor what done it. Old Breakwind, he couldn’t compete with it, no Sir. Shame I say, damned shame.”
“Thank you my good man,” said Rhinestone, bowing ever so slightly, “and where does one find this new armor I pray?”
The man nodded his head to the side – “down that street, and round the corner in Highcastle, that new shopping street.”
“Never heard of such a thing,” said Rhinestone, walking away.
On his way down the street he noticed that many old shops he’d once frequented were gone, boarded up, with For Rent signs nailed to the doors. In all his life he’d never seen such a thing, and he was sorely puzzled.
When Rhinestone turned the corner onto Highcastle Lane his puzzlement turned to surprise to see a great crowd milling around. There were great heaping piles of goods for sale, and posters with words like “New and Improved”, or “Price Reduction”.
But there were no shopkeepers to be seen, only clerks sitting at desks taking money from people lined up with armfuls of goods. Noticing a large sign hanging from the ceiling with the word “WEAPONRY”, the prince worked his way through the crowds. There a young boy was arranging maces in a neat pile.
“Where is the armourer?” asked the prince.
The boy looked at him with a vacant stare.
“The what?” he replied.
“Never mind,” said Rhinestone, picking up a mace and swinging it around. “How much does this cost?”
“One shilling,” said the boy, “but if you buy one you can get another for half price.”
Rhinestone frowned. “Why would I need two?”
“I dunno,” said the boy, “everyone buys two.”
Rhinestone pulled out a shilling and handed it to the boy.
“I’ll just take one, thank you.”
“You have to pay the clerk,” said the boy, pointing to the lineup.
Rhinestone pulled out another penny from his purse and gave it to the boy.
“Here, you go pay for me,” he said, and turned to go.
“You can’t do that here,” said the boy, handing back the money, “you have to pay the clerk, that’s how it’s done.”
Rhinestone took his money and walked to the back of the line that said “EXPRESS – MAXIMUM FIFTY ITEMS”. An hour later he paid for his new mace and walked out of the store onto the street.
As he turned the corner an armed and dangerous looking Hun appeared right in front of him. He was huge, with great big blue eyes and a hooked nose.
“Take that,” said Prince Rhinestone, smashing the Hun with his new mace.
The mace gave a great clang, bounced off the Hun’s head and snapped in half. The Hun glared at Rhinestone for a moment and began to laugh.
“I bet you that was a cheap imported mace,” he roared.
Rhinestone looked at the broken handle of the mace in his hand, and nodded.
“Yes it was,” he said, disgustedly, “buy one and get a second one for half price.”
“You should have bought a second one, you fool,” said the Hun taking a swipe at Rhinestone with his sword.
Expecting such a response Prince Rhinestone ducked, but the Hun’s sword cut the head off an innocent bystander who had been hurrying by. It was the man who’d bought the box of chain mail. Rhinestone picked up the chain mail from the box and held it up to show the Hun.
“If he’d only been wearing this it might have saved him,” said Rhinestone.
“Serves him right,” said the Hun, “the world is going for shite with all this cheap imported crap.”
“That’s a good sharp sword,” said Rhinestone, “where did you get it?”
“Japanese,” said the Hun. “Took it from a dead Samurai. I’ve beheaded hundreds with this and it’s still sharp.”
“Thanks for the tip,” said Prince Rhinestone, “but I think I’ll stick to my sword. It’s Italian.”
“Hmmph,” the Hun grunted, “didn’t help those Romans, but too bad about that fellow. I don’t usually do that.”
“Hey, no hard feelings,” said Rhinestone. “Let’s go have a beer, my treat – what do you like?”
“If it’s cold I’ll drink it,” said the Hun. “Can you get a good Hefeweizen in this town?