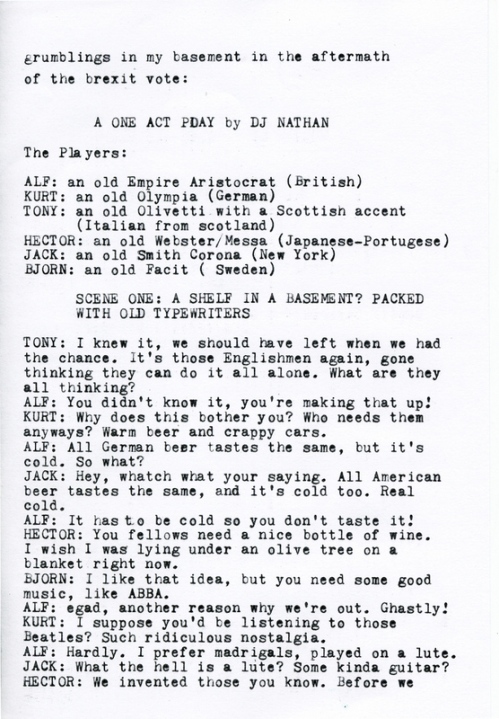 SCENE: A SHELF IN A BASEMENT PACKED WITH OLD TYPEWRITERS

TONY: I knew it, we should have left when we had the chance, it’s those Englishmen again, gone thinking they can do it all alone. What are they all thinking?
ALF: You didn’t know it; you’re making that up
KURT: Why does this bother you? Who needs them anyways? Warm beer and crappy cars.
ALF: All German beer tastes the same, but it’s cold. So what?
JACK: Hey, watch what you’re saying. All American beer tastes the same, and it’s cold too. Real cold.
ALF: It has to be cold so you don’t taste it.
HECTOR: You fellows need a nice bottle of wine. I wish I was lying under an olive tree on a blanket right now.
BJORN: I like that idea, but you need some good music, like ABBA.
ALF: egad, another reason why we’re out. Ghastly!
KURT: I suppose you’d be listening to those Beatles? Such ridiculous nostalgia.
ALF: Hardly. I prefer madrigals, played on a lute.
JACK: What the hell is a lute? Some kinda guitar?
HECTOR: We invented those you know. Before we discovered America.
BJORN: I have news for you. The Vikings were in America long before Columbus, who by the way, was an Italian.
TONY: That’s it – I’m going back to Italy to retire in the sun.
ALF: and good bloody riddance, too.
KURT: just wait, the English will be back, begging to join us after they fall on their faces in their English mud.
BJORN: I heard that if they exit, IKEA is pulling out of the UK.
ALF: they wouldn’t dare. Where will they get blueberry jam? The British Navy will embargo Sweden until they relinquish the furniture.
KURT: the furniture doesn’t come from Sweden you idiot. It comes from Asia.
JACK: Asia – you mean where all our jobs went?
HECTOR: who cares about jobs? We don’t have any! How I thirst for a nice glass of Ruby Port.
KURT: You know what it’s really about don’t you? Football. This is their master plan to win the World Cup. But it will fail, because we have mastered their game, ha ha ha ha.
ALF: Football is for hooligans. Our proper sport is cricket I’ll have you know. And by the way, we invented every sport there is, with the exception of basketball, which isn’t really a sport. A freak show for giants, actually.
JACK: Americans invented football, basketball, and baseball.
BJORN: actually, they were all invented by Canadians.
JACK: we call that America north.
ALF: just you wait until we reclaim the Empire, then you’ll all see what a brilliant move this is. (begins humming Rule Britannia)
KURT: God help us, can’t you stop? Anything but that. At least hum something everybody knows.
ALF: Well if you insist, how about this? (begins to sing: Yesterday … )
ALL JOIN IN: All my troubles seemed so far away…