The chap in the rear, third from right, was a journalist named Fred Openshaw. His hat, which looks a tad too large, is a classic fedora or trilby style, which can still be purchased from Christie’s of London should you be so inclined (I have a Knightsbridge model that looks pretty much just like these here).  Fred’s granddaughter graciously allowed me to photograph this picture after I purchased her wonderful old Royal Commander c. 1941, that was one of four typewriters Fred once owned. Fred worked at the London Times before moving to Canada, long ago. The Royal Commander must have been acquired here, since it is a Canadian model. When I offered to buy the machine the owner asked me if I would love it. I assured her I would. I didn’t bother to check it over to see if it was in working order, and she only wanted $7 for it, but I gave her a ten dollar bill anyways. 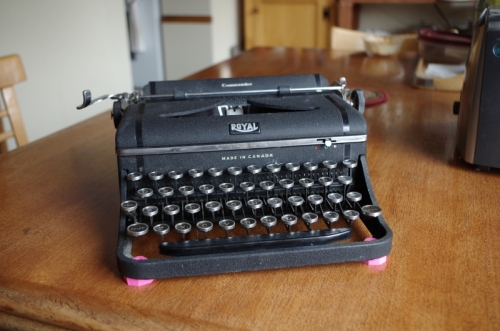 That was last Sunday and I am pleased to report that the old Commander is now up and running, and is a fine typewriting machine if ever there was one. It is also very lightweight, a real portable, and comes with a nice wooden case covered in a tweedy fabric. There were several minor problems when I got it – the carriage didn’t go far before stopping; the return lever was bent down too low, and the once rubber feet were now hard brittle disintegrating things. There was also a screw missing from a bar that pivots underneath. I found a screw that was a loose fit and filed off the tip of that to serve as a new pivot, then put that screw in place with a wrapping of teflon tape which held it tight. The carriage was still jamming midway however, so I removed the side-front-side panel and found that underneath was another frame, and I couldn’t see anything. I replaced that and when I was done I noticed on the bench that there was one tiny extra screw. Also, the carriage now worked. 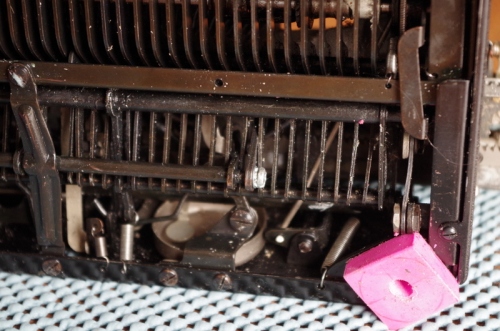 I brushed, vacuumed and blew out as much dust and dirt as I could and gave the innards a good soaking with PB teflon lube (not the cleaner). That stuff gets everywhere but it sure frees things up! For the feet I got an extra large soft pink plastic eraser at the dollar store ($1) and carved some new feet. I may do this again and get the fit a little tighter, but overall I’m quite content with pink feet. I have no desire to restore this machine to showroom condition, preferring the modifications to show. It pleases me that the paint, keys and handle retain something of the past that has rubbed off on them.

Commander seems to be a rarer label for these than Companion, which is what they are generally known as. I speculate this had to do with it being Canadian. Perhaps the Imperial Typewriter Company had dibs on the Companion name here? I like Commander better, no matter. I am puzzled as to why these old portable Royals are not at the top of the list of best all time typewriters. I’ve tested many machines and this one ranks with the best, even with carriage shifting. It is compact and surprisingly light. 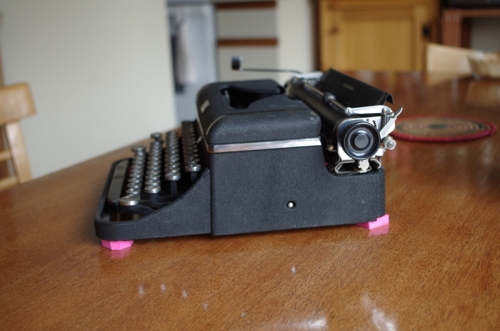 So what about the heading? Oh yes – Majestic! Last Saturday I picked up another JP-1, this one called a Majestic 400. It was cheap too, twice the price of the Royal at $14, but I liked the teal blue lid, so why not? It too had a problem – most of the old typewriters do, and that is a major source of amusement for me in my collecting habit – I enjoy fixing stuff. The back space didn’t work. I removed the bottom and there found the entire escapement. Those Brother engineers were brilliant – they not only made the most successful typewriter of all time, but they made it easy to fix! I saw that the little wire spring that held the lever which pushed the star wheel backwards was busted. Using a guitar string, of which I have many old spares in a box, I fashioned a new spring and with a bit of fiddling I got it do its job. A high E string of 0.010″ is very useful for small springs like this. Music wire is very much like spring steel.

I admire the simplicity and everything about the JP-1 typewriter, even though it looks cheap, which it was, and clearly still is. I once got one for $1. Some folks get them free however, which is infinitely cheaper, but that is largely irrelevant. What is the fair market value of a JP-1? Who knows? Maybe one day when the world is clamoring desperately for manual typewriters again, it will be worth its weight in gold. Aside from the spring repair, the rubber feet on this were all fossilized too, along with the rubber grommets that the lid snaps into. I took a grommet that was too large for the lid holes, and cut it in half. Then it fit into the holes and that holds the lid on once again. As for the feet – I haven’t figured that out yet, but since the bottom is a flat plate I can just place the machine on a rubber pad to use it.

half a grommet is better than none 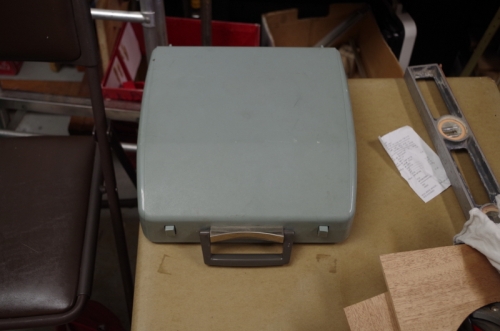 Parents’ commended it, and I recommend it.

That could be me coming to a bridge over an idyllic mountain stream, but I just made this scene up while testing some new paints. One of those peaks could be Mont Blanc, too! In less than 2 weeks I will see for myself when I arrive in Chamonix to hike the  trail known as the Tour du Mont Blanc, or TMB. Training with a pack is one thing, but trying to decide on what to bring is another. The perfect is the enemy of the good, yet I waste hours of thought and time dabbling with various paints, brushes, papers and so on, until I almost feel like forgetting about sketching altogether! However, that would be dumb, because I know that when I get there I’ll be itching to do a sketch – so around it goes. This fantasy was done on heavy watercolour paper using cheap acrylic paints that came in a set. The tubes hold 10ml each, and as soon as I squeezed some out I knew that 10ml would not be enough. For one thing the paint is too thin, and doesn’t cover anywhere nearly as well as high quality paint does.  Regular size tubes hold 60ml, which is way too much, but there aren’t any good paints sold in smaller tubes. Winsor Newton makes sets of  20ml tubes however, so I may try those. No doubt it’s decent paint. On any hiking trip you one should keep the gear down to a minimum, thus my sweating over the size of the paint tubes. It seems ridiculous, but ounces add up to pounds, as they say. Two more weeks to get it all sorted… 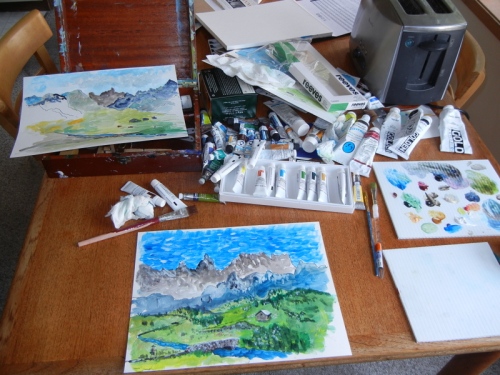