I published this one back in 2012 but then removed it when I submitted it to a short story contest. Needless to say I should have won but didn’t, so here it is again, in the spirit of a real Quebec winter.

Proulx at the bus stop

Saturday afternoon Mr. Proulx took up his usual spot at the outdoor rink to watch his local church team, St. Joseph’s play their archrivals, St. Patrick’s Irish. By the time he arrived the Pats were up a goal. The wind was blowing so hard towards the net of the Joes that they were having a difficult time trying to bring the puck to the Pats zone. The Pats on the other hand, with the wind at their backs, flew down the ice at the hapless Joes. No sooner had Proulx arrived when the Pats scored again.

“Come on boys, let’s get one,” shouted Proulx.

He gesticulated towards the Irish net as if they didn’t know where it was. He pulled out a flask and took a long swig. A few of the players looked over and laughed. It was a familiar routine; Proulx shouting encouragement, and getting tipsy. Sometimes when Proulx leaned over to thump on the boards his fedora would fall on the ice. The first player to go by would flip it up and over the boards with his stick, barely missing a stride. The deftness with which one could flip a hat or a lump of hard snow off the rink was a matter of common pride.

At the end of the first half the score was 2-0 for the Irish. The referee blew his whistle and the players scrambled half frozen from their boxes, heading for the warmth of the shack. Proulx thumped their backs as they went in and again as they came out for the next period, reminding them that the game was not over yet.

With the wind now at their backs the Joes came on with fury, soon tying the score. Then the wind moved, and both teams rushed from end to end with equal speed, passion and precision. But there were no more goals, and with only two minutes left Proulx cheered and pounded vigorously on the boards, calling for his boys to score the winner. It was then that his hat fell off.

A gust of wind blew Proulx’s black fedora into centre ice right in the path of one of the Irish players. He slashed the hat on his backhand sending it sailing out of the rink. Like a kite it soared into the air, where the blustering wind carried it far away across a snowy field.

Swiveling his head to watch the hat, while his body was halfway through a quick turn in the opposite direction, a St. Pat defenseman tripped and fell. His pathway cleared, a St. Joe winger cruised in with the puck and scored.

Out in the field some youngsters were playing with Proulx’s hat when he walked up to them. One dutifully returned it as Proulx said to him, “That’s my lucky hat, you know”.

Monday afternoon Mr. Proulx was walking down St. Catherine St. smoking his pipe, his head held high. He had a satisfied look on his face, as if he had just heard some pleasing news. Only he hadn’t heard anything of the sort. This was merely his usual way of walking and pipe smoking.

He was thinking about how, his hat having fallen off at the opportune moment, he had inadvertently assisted his team to defeat the Pats. It seemed like it was nothing more than a lucky coincidence, although the rude treatment of his hat by the Pats player served to make it a case of just desserts for the Irish. Such is the randomness of hockey he concluded. It could have gone either way.

Passing by a liquor store he went in and purchased a hip flask of his favorite whiskey. Back on the street he continued his walk, pausing to look in shop windows full of Christmas goods.  He stopped at the corner newsstand, perusing the daily papers for anything of interest. He was about to move on when he noticed a small headline in the left hand corner of one paper.

One Goal Hat Trick it said. Proulx picked it up and handed over a few coins to the newsy. The paper tucked under his arm he continued his stroll. A few blocks west and round a corner he reached his tavern, where he took his usual table. No sooner had he sat down when the waiter arrived with the customary order of two draft beers.

Leaving his hat on, Proulx slung his coat on the back of the chair, relit his pipe and opened the paper. He peered at the little article in the bottom corner. To his surprise it was a brief account of the game at which he had lost his hat, and the subsequent events leading to the winning goal. The writer concluded with the observation that St. Catherine must have interceded on behalf of the team which the hat owner supported, her being the patron saint of hat makers. An affront to a good hat must have caused her divine intercession.

Mr. Proulx had emptied one glass. He reached behind himself to pull his flask from the inside pocket of his coat. He poured a little shot into the empty glass and drank it down in one gulp, followed by a swig from beer number two. Then he went back to reading. Here was a story about panic in the markets, here another about the divorce rate in Russia. He turned to the editorial page to see what the issue of the day would be. Now here was yet another shock: it was about miracles, the hat he’d dropped on the ice, and St. Catherine, patron saint of hat makers, lace makers and so on.

“Now that’s a strange coincidence,” thought Proulx. “Me sitting in a tavern on St. Catherine Street, reading about the very hat that sits on top of my head.”

Moments later Proulx’s friend Tremblay arrived, followed by two glasses of beer. Mr. Tremblay had no knowledge of the One Goal Hat Trick or of Proulx’s part in it. When he asked Proulx what was new in the paper, Proulx smirked and directed Tremblay’s attention to the first article.

“So you believe that your hat won the game?” asked Tremblay with a smile.

Mr. Proulx shrugged and pointed out the editorial page. Tremblay read on. He nodded his head saying “hmm” to himself several times as he read.

“A miracle perhaps,” he said when he was done, taking a sip from his second beer.

“Well, if it was a miracle,” asked Proulx “Then was it the hat, or was it St. Catherine?”

Tremblay was truly puzzled. Of course, it had to be something, but what, and how? He told Proulx that he would think on the matter. They drank up their beer and had a game of cribbage before they left.

It was windy and bitter cold out as they exited onto St. Catherine Street. Hard snowflakes drove into their faces and swirled up in columns like little tornadoes. Tremblay extracted a toque from his pocket and pulled it tight on his head. He looked at Proulx who was buttoning his coat when a sudden gust sent the lucky fedora flying into the street. They both turned their heads to watch it go as it hit the road and tumbled into the far lane. While Proulx watched in vain for a break in traffic a bus ran over the hat, leaving it crushed and filthy by the far curb.

Tremblay put his hand up to his head and groaned. Proulx remained silent, nodding gently as if talking to someone who wasn’t there. Then he pulled his pipe from his pocket and stuffed it between his teeth. He lit up, giving a hard puff so that it belched a small cloud of smoke.

He turned to Tremblay and gave him a pat on the back. They moved on down the street together.

“Well, it’s her street after all, isn’t it?” remarked Proulx.

Tremblay looked at him.

“You know, I had a notion that it was just the hat.”

“No, it couldn’t have been the hat,” replied Proulx. “It must have been St. Catherine.”

Tremblay looked back at the flattened fedora.

“Well, there’s no other explanation,” Proulx said with a sigh.

The hat lay on the street for a little while. Then a boy came along and picked it up. He punched it into some semblance of a shape and took it home with a mind to put it on a snowman.

The Cup Runneth Over 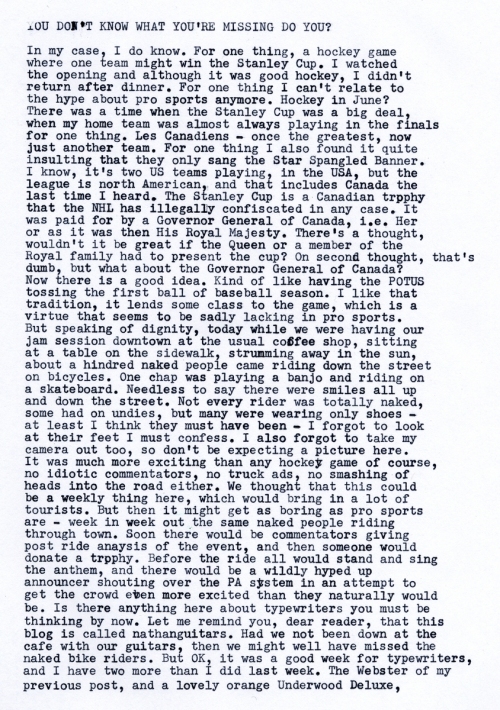 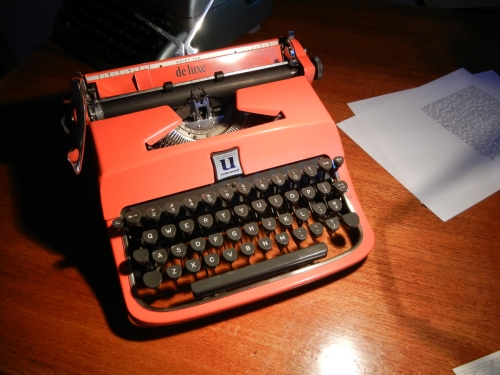 Underwood Deluxe Golden Touch Quiet Tab: with this many names it should be a Royal

No News is Good News