As I noted here a month or two past, I spent an inordinate amount of time in deciding what sort of sketching media to take with me to Europe and the TMB hike. Once on the trail I soon discovered that there was no time for sketching.  You hit the trail just after 8 o’clock, hike for an hour or three and then eat lunch in pleasant exhaustion while recovering for the afternoon. Maybe you eat a 2nd lunch at 2 p.m. No matter, it’s highly unlikely you are lunching and have energy or inspiration to pull out the sketchbook and paint box. At the end of the day when you get to the next refuge, you dump your stuff and if lucky, you get to sleep for an hour before dinner. Then you talk to folks, and write in the journal.

one tick on the coaster for every glass you drink

However, I did do some sketching before and after the hike, when I had plenty of time to sit and observe. My first stop was Dusseldorf, a beautiful city on the Rhine River. Among the attractions is the alt-stadt, where the streets are full of people, not cars. How ridiculous! Also there are some lovely beer gardens that dispense alt-beer, a dark and flavourful brew which, unlike most German beer, is top fermented. Unfortunately most German brew-masters who emigrated to North America brought with them lager beer, which in my opinion isn’t half as tasty. But you can still get alt-beer in Dusseldorf,  a drink I enjoyed while sitting at a bar in the alt-stadt with sketchbook at hand.

While lolling on my stool I discerned a faint sound coming from down the street. Soon I realized I was hearing a hand cranked miniature pipe organ, from which pipes came a sweet folksy tune. Shortly, before my eyes appeared a real live organ grinder. He parked his organ beside me and took a seat at a table; then proceeded to smoke a full pipe, after which he shut his eyes and had a snooze. Refreshed, he got up after a half hour and returned the way he came, grinding out a new tune. 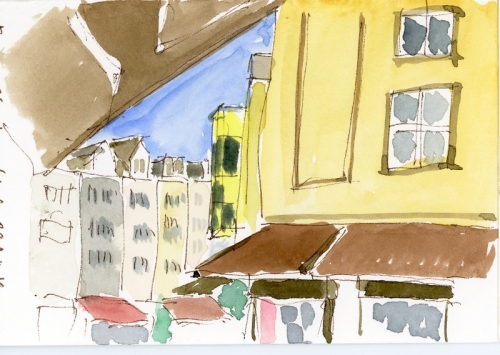 looking down the street, Alt-stadt, Dusseldorf

Stealthily, I managed to capture him on camera and in my sketchbook. Maybe this is so commonplace in Europe that organ grinders are taken for granted, but to me it was a magic moment. As for the question of whether or not he was lonesome; if you spent all day pushing an organ around, who could you talk to? 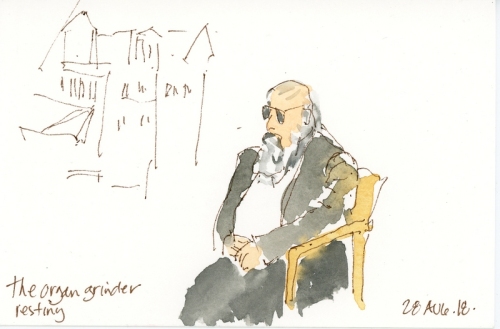 organ grinding is a lonesome job