The other day I picked up a cheap old tele-converter for Pentax, for five dollars. I thought I’d test it out with my 500mm Tamron mirror lens, just for fun, expecting nothing. This is close to a 28x power telescope on the APS-C size sensor of my K100 DSLR. There are two problems with doing this; first thing is it reduces the aperture another f stop from f8 to f11, thereby slowing down the shutter and forcing the ISO higher. Both those factors effect image quality negatively. But second; the thing is really hard to hold steady! However, in the sunshine today I was able to get a few shots, which proved not bad. Remarkable in a way, when you consider these were hand held. The hawk probably would have been acceptable if I’d used a tripod, as the shutter speed was 1/45th of a second. That’s absurdly slow for a 1000mm lens. I applied some post processing to that image to try to make it look more artsy, since it was rather fuzzy to begin with. The heron was about 200 feet away however, and it turned out not too badly. If I wanted to get better results than this I’d have to buy a lens that costs over a thousand bucks, which isn’t going to happen soon. 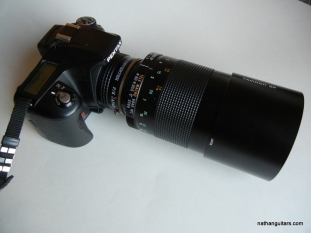