The post office delivered the wood on Sunday. Only at Christmas time. So I got to work and joined the top and back plates. For this I use a jig known as a shooting board. I find it hit and miss, but eventually with enough planing and sanding with a long straight edge the two pieces matched. To test if they do in fact match, you only have to hold them up to a bright light, edges together. Any defects will shine through.

After I joined the plates I tackled some other sundry tasks. One was to put the neck dots in the fingerboard. This is done by drilling holes and stuffing in round plastic rod. The plastic is immersed in acetone for 30 seconds, during which time it begins to dissolve on the outside. Then you push it into the holed and snip it off. Later when it hardens up again it will be sanded down flush. After this I marked and trimmed the fingerboard to a rough taper, with an extra millimeter on each edge.

Back to the sound board: next step is cutting the channel for the rosette. This rosette is simple, just four 3ply black and white laminated strips sandwiched together. I have a jig for this, comprised of my Dremel tool, a special base plate and a plywood base with a steel post in it. The channel diameter is set and then cut with a down-cutting spiral bit. I had to make two cuts to get the correct width for the laminated purfling. Then I tapped the 4 plies into the channel which was pre-filled with thick super glue. The purfling was pre-fit and cut dry beforehand of course. A while later when this was all dry I put the top back on the plywood base and cut out the sound hole. First I cut halfway through on one side, then flipped the piece and cut through the other side.

I also sawed up some brace stock from a nice piece of kd hemlock trim I bought for this purpose. It was already 10mm thick, so I simply ran it through the band saw to get the height I needed. I rough sawed them to 17mm. Next step was to draft the curve of the top onto the braces. This design calls for only three braces; the upper face brace which is at the end of the fingerboard, and the main X-brace. I have a curved template for this. I then use the bench sander to grind off the bulk of the wood, then switch to the disc for finishing. With a little practice you can get a perfectly smooth curve this way. All three braces use the same curve, which provides the dome in the top. This dome in turn provides the strength to carry the force of the strings  on the bridge.

gluing the top plates, with weights 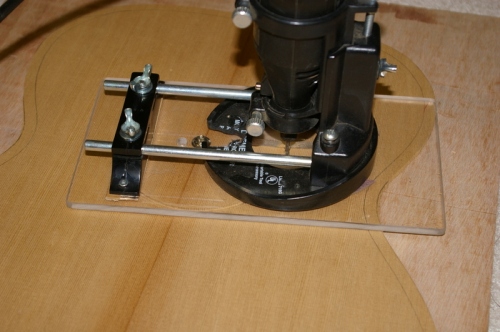 purfling strips glued into the channel

underside of the sound board, marked for braces