Now this thing has to be the lightest typewriter I’ve ever come across! It was made in England and sold at Eaton’s as a Playfair Feather Touch. The only metal I saw on it were a few screws, and every other part was plastic, including the type slugs, which have 3 characters each. This you could carry on a backpacking trip, if only it was likely to work. It did seem to work from my testing, but the tiny ribbon, about 1/4″ wide, was not inked enough and was all twisted, so that was an assumption. They were asking a ridiculous price for it too, so I let someone else have it.

This great generosity was well rewarded soon after when I picked up two real typewriters in succession, both very similar to each other and for a good price.

First was this one: 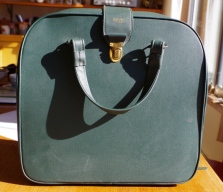 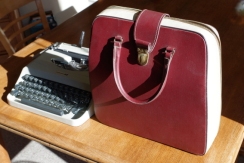