Typing – the Next Generation

I recently attended a birthday party for a friend who turned 80. It was a multi-generational event, where ages ranged from 80 to 8. I decided to bring along a pair of typewriters and set up a station where people could type messages to the honoree. Expecting there would be plenty who were familiar with typewriters, I was confident this would be a hit. The typewriters I brought were: a Smith Corona 5 SS (branded Eaton’s Prestige) and a Brazilian Hermes Baby. I set them up, loaded the paper, put up a card explaining the idea, and waited. 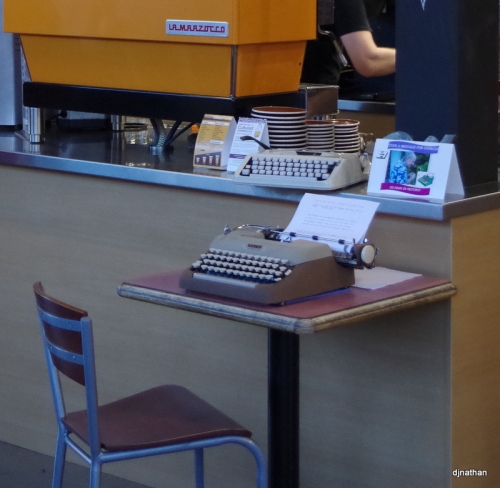 After a while it was obvious the older crowd was less than enthused, but not so the younger crowd (or as it happened to be, the youngest person).

My friend’s youngest granddaughter soon took up semi-permanent occupation of the Silent Super Station (SSS) and with instruction from a helpful aunt began to peck out line after line.

At first disheartened at the lack of interest from the adults, retrospection lightened my heavy heart. Typospherians, the uplifting news is that our beloved machines will live on via the youngest generation! We must hope this signals a resurgence that will redeem our compulsive buying, cleaning, tuning and doing whatever it is we do; putting them on shelves or writing books, poems and other nonsense. Though the typewriter may be of little interest to those for whom they were once ubiquitous it may yet prove to be a great interest to those who don’t yet even recognize them.

So I declare my mini-type-in a success. It all depends on interpretation. Several brave adults did manage to type messages, and I salute their courage.

I leave you with a fragment…

P.S. SC SS5 is highly recommended for type-in use!

One response to “Typing – the Next Generation”