It was a day of sublime beauty here. I found another typewriter. Underwood “Correspondent” made in Toronto. Works perfectly, and a great pleasure to use. Parallel action keys no less.

Since the name of this blog has the word ‘guitars’ in it, I feel obliged to provide from time to time some relevant content pertaining to same, to wit the following instructional(s);

Tagged as gypsy jazz guitar, how to 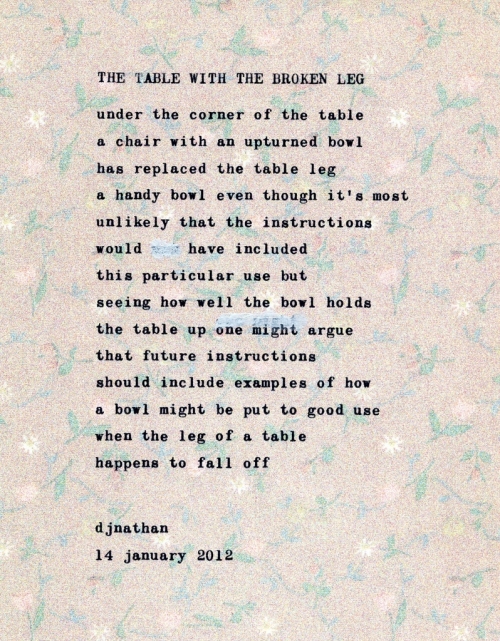 While trolling thrift shops for typewriters I turned up a few interesting objects the other day. Some undoubtedly lovely, and one absolutely revolting.

1 – tiny dish with enameled painting of Piccadilly Circus. Made in England by Wade.

2 – glass coffee mug, Fire King. When I drink from this I’m expecting a waitress to come by and say “can I heat that up for you sweetheart?” 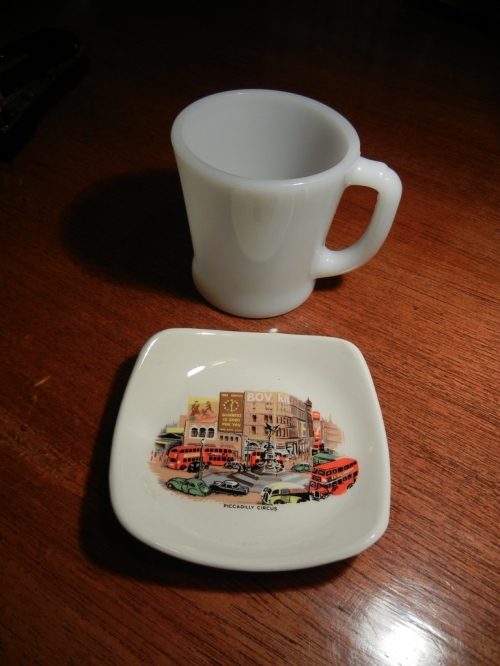 3 – Swedish made stapler with retractable staple removal tool on the bottom. The Volvo of staplers. Form follows function, neither too heavy nor too flimsy. Solidly made.

A useful little notebook, once presumably humorous now takes on an air of pathos. The question is “what to do with it”?

Yesterday I purchased my 10th typewriter. To say “old” typewriter would be a tautology no? The one I just got dates from 1959 or so. As tools and objects with useful lives go, that’s old. I may be older but that’s different. I am not old. I am seasoned. In my mental rough guide to typewriters an old-old typewriter would be from the 1930’s, i.e. before my time. This I admit might be an insult to some folks I know, so perhaps I shall revise the date further back in time to when no one living now can remember. That would be an old-old typewriter. Antique even. But in technological terms, anything that is more than say, six months old, is now “old”. Just look at your phone. It’s already obsolete isn’t it? I bet there are six generations since it was made.

Back to the machine:  Smith Corona “Sterling”,  virtually identical to the last typewriter I acquired – a Smith Corona Silent Super (aka series 5) with the Eaton’s label. Except this one has been used a lot. It had 2 non-functioning keys, and the letter “n” was crooked and too high on the page.  I raised the hood to have a better look inside. It has a hood like a car. Not only that, it has a trunk! To top it off there are rabbit ears ( the antenna – ok cars didn’t have rabbit ears). There is no radio however. Under the hood is the engine, the guts, all those little pieces that are connected together by other little pieces. The reason that the 2 keys were not doing anything was that the intermediate arms, (connecting rods –  engine analogy) had come detached from the type bars. Not only detached but rather bent. Some fiddling and straightening done I managed to reconnect these now straighter rods to the bottom ends of the 2 corresponding type bars. This connection is ingenious to behold: a tiny spring clip. Perhaps some sort of safety feature, like a telescopic steering column, designed to separate under excessive force.

A Wee Drop Tha’s All

Walking in the Forest of October 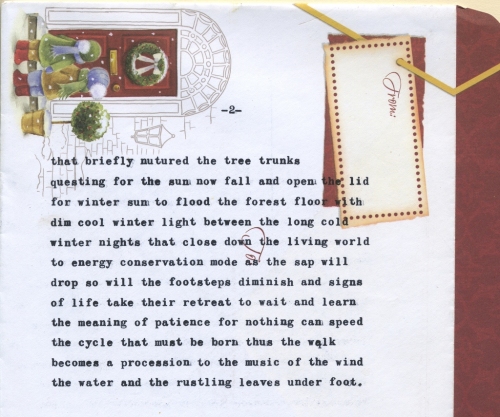 My typewriter sits on the coffee table, ready for me to type something at a moments notice. I sometimes just sit and hope for inspiration to come. When nothing comes one method is to start something based on what I’ve seen or heard recently, or whatever pops into my head while looking around the room. I heard about the owls on the radio today. As for the rest…

a poem is not a novel

Written during a break from writing my November novel for NaNoWriMo. 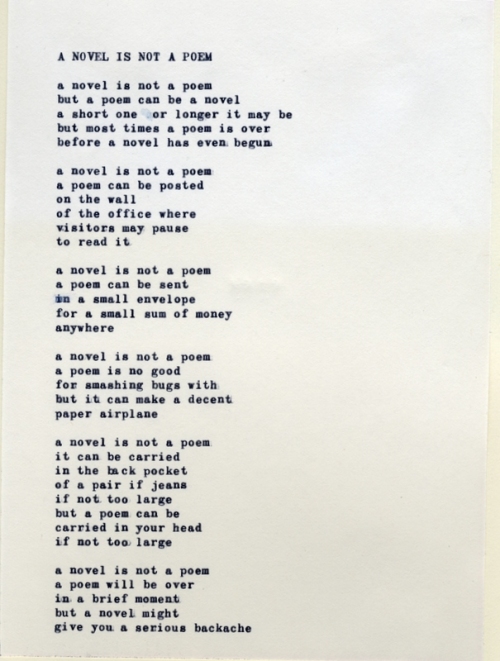 typed on the Olivetti Lettera 22

From Elvis to Mambo

FROM ELVIS TO MAMBO

He would have been 77 today, our birthday. Above – one of the first LP records I owned, and now I consider it a classic. It was acquired new, unlike most of my LP’s that have been purchased for 50c or $1 in the used bins. These days I’m looking for jazz in the main, but sometimes there are oddities that catch my eye, like the LP below.

Ordinarily I disregard the bargain labels like this one. When they print the price on the cover you have to figure that it’s cheap for a reason. On the back of the jackets they have advertising. This one lists such gems as “Organ Hit Parade” and “Polka Hits”. I liked the cover however, so I gave it a whirl. It was a good record. Better than some Elvis. Happy Birthday.