Once again I’m finding things seem to come in waves, and here is another example: I found my 2nd old metal card file box in as many days. This time the box was empty, but nevertheless the same box with a different paint job. 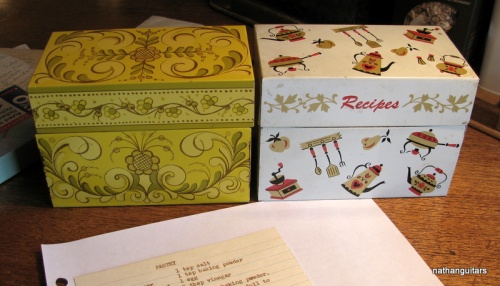 Meanwhile I’ve been amusing myself trying to discover the sort of typewriter that was used to type the pastry recipe on the index card I featured previously. I typed the same words using an old Underwood Golden Touch but that didn’t look like it, so I then tried with a 1948 model Royal Arrow. That looked very similar.

Here is the direct comparison of the new card (Royal Arrow 1948) and the original card (unknown). The old ink is now brown, and it looks fatter, but that may simply be how it was absorbed by the paper when it was typed in the first place.

Going through the recipe box thoroughly I discovered a few more typed recipes, which I present here.

This next recipe comes from a different machine, at 11 characters/inch. My first guess would be a Brother, but it could well be an Olympia too, as they made plenty of 11 pitch machines. I have not investigated this typeface yet.

Back to the other typewriter again for a Mystery Cake. 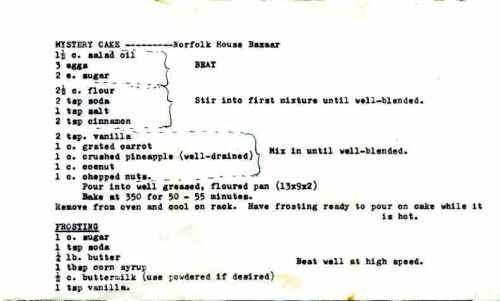